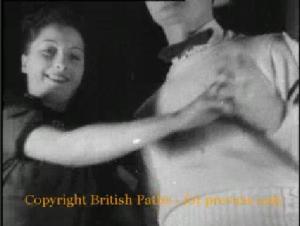 UPDATED: Edited with better grammar for your enjoyment. (Thanks, Chelsea!) (11/11) The recent waist-down clip discovery was from a few nights where I dug around some film footage archives. Here are some of the other clips from the archives that I’ve been watching.

Jitterbug Mania! — Cincinnati, 1939
Gary House, a dancer from London, sent me to this newsreel, which I had seen before, but hadn’t watched with eyes as keen as Gary’s. He pointed out to me that, aside from the Shag and Lindy, it is possible that the last couple highlighted is doing some LA Swing (early form of Bal-Swing). I watched it and talked it over with David Rehm, and we agree it’s possible. At first there’s some Slow-slow-quick-quick timing in their footwork, which is usually affiliated with Shag, but the leader is flat-footed, there’s tapping and tucking involved, and the Lolly-like twisting and come-around-like thing they do are pretty characteristic of Bal-swing. What makes this peculiar is that Bal-Swing was mainly only a Southern California dance at this time, so, if it is a Bal couple, there’s probably an interesting story about how the dance ended up in an Ohio contest. (Of course, it could be something as simple as “the guy moved from SoCal to Ohio and taught some people there how to LA Swing.” Still, though…) They also have a sign on their backs that I can’t quite read, but is possibly an advertisement for a dance hall. This reminds me, there is also a “twisty” swing dance that shows up in some of the reels of a 1930s Chicago dance festival that makes me keep thinking it’s people doing swivels. So there may have been some generic swing dances of the time that had Bal-Swing like characteristics. Anyway, nice clip. Thanks, Gary!

World War II Man Swivels, 1945
Dancing takes place in the second half of the newsreel. Even back in the 1940s, the occasional man could bust out some swivels.

Venice Beach Newsreel, 1938
Every time I see a site’s version of the Venice Beach swing dancers, I can’t help but think there’s possibly two nanoseconds I haven’t seen before, somewhere in there.

YWCA in Harlem, 1940
They apparently taught Charleston and solo jazz to kids in Harlem in the 1940s. It’s near the end of the newsreel.

Jitterbug in Australia, 1944
This looks very similar to a Harvest Moon Ball setup and style of contest. Dancers could include all of the following: Aussies doing the Aussies’ own swing dancing, American GIs, or Aussies that have learned from American GIs.

Jitterbug Jamboree, 1941
Some Harvest Moon Ball footage, some of which I haven’t seen before, and it shows some rare Harvest Moon shots of White Harlem-style couples, as well as a few seconds of one of the heats that is obviously full of Whitey’s Lindy Hoppers (starting about halfway in the clip). At first I hoped this might be footage from the famous 1940 Harvest Moon Ball, which most of the Hellzapoppin’ Whitey’s Lindy Hoppers were in. Though, Frankie’s last ball was 1940, and this newsreel is reportedly from September, 1941, and one would figure “news” would mean relatively recent. (Although, stock footage was occasionally reused in newsreels.) I don’t see any dancers that appear to have Frankie’s styling, nor do I see any recognizable dancers among the Whitey’s, though Norma and Billy’s froggy aerial from Hellzapoppin’ is in there, as is a very Frankie-like combo at the top right of the screen. (But this doesn’t mean much; Whitey took a lot of the routines from the top dancers and taught them to his lower dancers.) If it is from the 1941 contest, it was when the Hellzapoppin’ Whitey’s were probably in California. And Frankie didn’t dance in the ball after 1940, according to his autobiography. Also, according to http://www.streetswing.com, Shorty Snowden was in the contest in 1941.

Harvest Moon Ball, 1943
In the middle of this newsreel there is some Lindy Hop.

British Jitterbugs, 1943
A ballroom lady puts down jitterbug, offers bland substitute. The Jitterbugs (Tony Jackson and Mavis Sutton) then have their souls sucked away. Tony has nice hair, though.

Savoy Exhibit from the World’s Fair
In which you can see two swing-outs and a circle by a Whitey’s Lindy Hopper couple at 1:52.

Whitey’s Lindy Hoppers and others Performing/dancing in the Savoy
At 1:00, see a good version of the common newsreel footage of Whitey’s dancers dancing in the Savoy. Notice the Whitey’s varsity jackets. The design is the same as that on their Big Apple shirts in Keep Punching. It says “Whitey’s” across the top, and has a design of curtains opening over a stage or something. I’ve never been able to catch more detail than that.