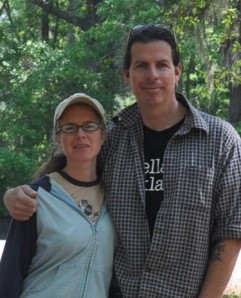 Paul & Sharon were one of the most important international couples in Lindy Hop in the early 2000s. I interviewed Paul for the Love & Swing series, and found the interview so enjoyable I wanted to share the entire thing with you. I publish it this week as a precursor to the next post: Love & Swing (3): Partnership.

“Paul Overton and Sharon Ashe began Lindy Hopping in 1994 under the tutelage of Steven Mitchell and Frankie Manning. In their seventeen year partnership they have traveled the world dancing, teaching, and meeting some of the best people, ever. They are co-founders of the San Francisco Swing Dance Festival, The Oakland Swing Dance Festival and the 9:20 Special weekly dance.

Although they are mostly retired from dancing, their partnership has moved happily on to other projects including music, yard work, and dog wrangling. They live happily in Durham, North Carolina…the finest city on earth.”

How did you get into swing dancing? And how did you meet your partner?

I got into ballroom first. I had done some dancing for recreation in grad school and started again in San Francisco in 1993.

Sharon and I were both completing the teacher training course at the Metronome Ballroom in Potrero Hill and we taught a beginning Latin class together, so we were more or less selected by our boss to begin teaching together.

We weren’t romantically involved until about six months later (it took me that long to get her to go out with me).

Soon after we got together, we signed up for a workshop with some dude named Steven Mitchell and from that day forward, we were all about Lindy Hop. Not that Steven isn’t always inspiring, but he was absolutely on fire in that workshop. I don’t think I’ve ever been more inspired than when I walked out of his class that Sunday…exhausted, happy, and unbelievably frustrated that I couldn’t do any of the stuff he could without looking like a clown.

Steven quickly became our mentor and the rest is history.

When did you realize you were becoming international swing dance instructors?

After we taught in our first year in Herrang, we started to get offers to work abroad. Also, teaching at some other high profile camps like Catalina, Beantown, Dallas, and Swing Out New Hampshire started to garner us domestic attention. Soon, we were working 4 days a week in San Francisco and traveling the other three.

In what ways, good & bad, did the professional dancing affect your romantic partnership?

As for the effect that professional dancing has had on our relationship, I can honestly say: it’s all good. Sharon and I have always had the unique ability to spend 24-7 together and also manage to keep any homicidal thoughts at bay.

Dancing taught me as much about what a true partnership is “off the floor” as it ever did “on”. You have to be very patient, you know? You have to be able to quickly come up with and, just as quickly, discard ideas, no matter their merit, in the interest of compromise and flow.

Did we drive each other bonkers sometimes? No doubt. But the underlying respect that we have for each other always kept the wheels from coming off. I honestly think that Sharon is the best teacher I have ever met. She has virtually no ego and that allows her to always put the development of our students ahead of any personal concerns, including money. Even if I disagreed with her at times, her track record of making smart, compassionate decisions, always made me stop and reconsider my point of view. She’s special like that.

What lead to your decision to stop teaching … or, at least, doing it professionally?

Well, things were changing. We were changing too. We never started dancing to become famous or even well known. We started because we loved the dance and we were good at breaking it down into bite-sized chunks. All the while, I think we did a pretty good job of staying true to ourselves and just being “Paul and Sharon” instead of following trends that were happening around us.

In the end though, we found that not as many people were interested in “Paul and Sharon” as they used to be, which made it difficult to make a living without compromising some of the things we held dear about the dance and the community. So, rather than sacrifice our integrity, we decided to reinvent ourselves (again) and retire from the dance world.

We would both, I think, prefer to have a “downstream” attitude about changes in life. Being that experience is forever in flux, it’s much easier for people like us to find a way to go with the flow rather than try and fight to keep things the same. That takes a whole lot of energy and is, for the most part, a fruitless enterprise (at least for folks like us).

What advice do you have for those who are trying to juggle both a romantic relationship and a dance relationship?

First, I want to speak to the phrasing of the question…For us there is no difference between the two. It’s all partnership. We are business partners, romantic partners, dance partners, etc. There is no “juggling” to be done. We treat each facet with equal importance and are constantly aware of how they all work together to create a “life”.

But that’s not very concrete, is it?

I think that, in both worlds, you are doomed to failure if you don’t actively cultivate patience and a willingness to compromise. We all have ideas about how things “should” be done, and that’s fine. That’s called creativity, right? But if you can’t change gears and let go of some of those ideas in service to the health of your relationship/partnership, you’re sunk.

I think that we should all think about what “partnership” means to us. A clear definition of that is like a road map for navigating the tough stretches that we all have. If you take, say, the teaching aspect of your life and figure out what your priorities are in that area, you have much less of a chance of getting bogged down in whatever distracting minutae is arising in the moment.

For instance, we’ve always been very clear that the reason we teach is to empower people…to gently guide them on a trip outside of their comfort zone and to let them know that our class (their life, really) is a safe place to experiment and make mistakes in service to becoming a better dancer and a better person.

If I know that is the endgame, everything else falls in line to support that goal. I know that, in order to be successful at the prime directive, I need to put aside whatever ego I may have about dancing, and just be present so I can be supportive in the way that I need to. Same with our romantic relationship.

It’s all about listening, in the end. We listen for what’s needed and then we support that with our actions. Anything else is extraneous and can easily lead to dischord. Whether we are teaching dance or working on our taxes, we know that if something is bothering us, it’s usually temporary and the best way to get through it is to have a deep well of compassion and respect for the other person and to support one another in regaining our equilibrium.

How much do you keep up with the national Lindy Hop scene today?

I don’t keep up with it much. I’m very happy that the dance continues to be popular, but it has taken a bit of a turn away from the tempo and feeling I prefer. Mind you, that is purely a preference. Nothing wrong with where it is or where it’s going.

Is there any general advice you have for those starting off as professional swing dance instructors today?

As dance teachers, we experience a lot of change. The scene is an undulating mass of trends with a chorus of competing voices, wishing to be heard. Some people have very specific ideas about how one should dance, dress, and relate to music, and those ideas will forever be present in the dance scene, just as they are in any other “hobby”.

In order to keep your sanity and remain an ambassador of the dance as a whole, I think it’s important to cultivate an attitude of acceptance around all hoo-ha that one has to deal with as a professional dance instructor. The truth is…none of that stuff matters. 99.9999% of the population isn’t paying any attention, nor do they care.

Beginners especially could give a hoot about difference in styles, swing history, fashion, etc. Most folks, I have found, would simply like to hold another person and move in time to some music…and that’s a beautiful thing. When we lose sight of the central idea of partner dance which, at it’s core, is to simply be able to rhythmically express yourself with another human being, we have lost what is most important.

Those who remain humble and understand that using their gift to facilitate the success of others is the main objective, tend to be those who get hired the most and experience the greatest longevity in the business.

It’s not about me, or you, or anyone who teaches. It’s about the students. It’s about giving people permission to live outside of their comfort zone. It’s about showing folks possibilities that they, formerly, had no idea even existed. It’s about giving them access to a whole new group of friends and membership in a worldwide community. For me, that’s where the magic is. That’s why I continued to get on airplanes every week and travel to different gymnasiums all over the planet.

If that’s what you’re in it for, you’re in good shape, I think. If you’re in it for recognition or fame or just validation, I don’t think you’re positioning yourself to be of the greatest service to the most people. You may well get “Lindy Hop famous” (like internet famous, but even less so), you might get recognition and even a little money, but in the end, it’s an empty victory. I think that most of the old guard would agree that the most important thing, and the thing we have always cared most about, is giving people a lasting and indelible, positive experience, whether they are with us for an hour or several years.

Special thanks to Jerry Almonte for his help in in this interview.

47 responses to “Interview With Paul Overton of Paul & Sharon”