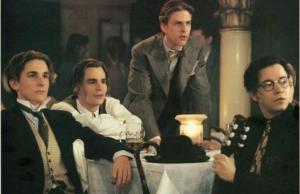 The first time I remember seeing swing dancing was in the movie Swing Kids, though at the time I recognized it as swing dancing, so I must have known it existed somehow before, probably in a random box in the cluttered garage of my subconscious, next to the skis.

Swing Kids came out in 1993 (when I was 13), and I didn’t see it until my sister, who had a crush on fifteen of the sixteen boys involved in the film, rented it from Blockbuster. I remember wanting to dance, dress like them, and basically lead their lives without the Nazi Germany part (which is probably what they would have wanted, too.) I put swing dancing on a list of things I was going to do, after becoming a rock star at 17.*

(*–When I was 7 or 8, my band’s name was “The L.A. Cobras.” I was on lead tennis racket and singing, naturally. I used a pom-pom under a cowboy hat to get the Guns N Roses hair. I had a hat collection. By the time I was 12, I think it was called “The Blue M and Ms” and I had moved up to real guitar, but had no amp and when I actually got my friends together for a practice, my best friend tried to take over the band and literally, the band broke up at the end of a one hour rehearsal, most of which was spent trying to come up with a name. We never decided on one, but I distinctly remember our drummer wanting to call us “Butt Zits.” She now has two kids.)

Swing Kids was oddly very meaningful for me at this time: First off, it was a movie about youth rebelling Nazi Germany, which meant it automatically was awesome, despite a rather lackluster ending. Second of all, it had, as its heroes, intellectual and passionate youth–which was NOT the case in any high school in the world ever. I immediately rooted for the heroes and gained some much needed self esteem.

After seeing it, I remember going to my next hair cut appointment, and trying to describe a Swing Kids haircut. (I have done this for the last fifteen years, and still haven’t gotten the result I want. But I won’t give up trying. And besides, my new barber is getting close.)

A few months after I saw Swing Kids, a girl I probably had a crush on (I had a crush on 83% of the girls in my high school), and I talked about the movie, and she said she loved the soundtrack. She brought me a cassette tape of it and I listened to it non-stop for months. I realized how much I loved the swing music.

Cut to early 1998ish. I remember I saw “The Gap commercial” when it aired after the Seinfeld final episode, which millions of people had watched. I heard about a movie called “Swingers” about young guys in the L.A. cocktail scene. For some reason, swing was in the air.

At this point, I was 18(ish), not a rockstar, but instead was one of the lead actors in my high school theater, which I take a great pride in, because our public school department was good enough to win regional and state competitions with straight shows and existential comedies instead of blockbuster private-school musicals, which was unheard of in Georgia. At this point, a group of girls in our theater wanted to take swing lessons, and asked a group of us guys to be their partners. When they said the words “you know, like Swing Kids,” I was there.

“There”, in this instance, was a small dance studio run out of our teacher’s house. Our teacher, who shall remain nameless, was a middle-aged woman we soon found out was recently divorced, and quite bitter about it. So bitter, she apparently drove off every other guy in our class until only I was left; but I credit my obliviousness more than anything else at keeping me around. Plus, I obviously thought the dance was fun as hell.

From the very beginning, I took Swing Kids as my guide. I made my rock steps HUGE, I bent over, I asked about “the kicky footwork” which I later discovered was Charleston, and wondered why we only danced to Smashmouth in class.

She told me to take tiny rock-steps, stand up straight, said she didn’t know Charleston, and occasionally would play “String of Pearls” for us to dance to when we begged her for some swing music.

One time when her dance partner just happened to show up to our Saturday morning class, they did a demo for us to a country western song, and the dancing looked almost nothing like anything we had been doing. They were actually dancing–we, however, had just been going rock-step triple-step-triple step.

I remember being slightly annoyed–they didn’t teach us any of that, but now I of course realize it’s because they had been dancing for years and years, and I was trying to concentrate on not falling over during a triple step.

After the six weeks, me and a few of my friends all decided to go out swing dancing at the Masquerade, an Atlanta club which had had swing dancing on Sunday Nights. I remember walking into the club and seeing a ton of people all doing pretzels and wearing martinis shirts and NOT LOOKING ANYTHING AT ALL LIKE WHAT I HAD BEEN TAUGHT. If there was a triple step in that room, it had been taken out back and shot. I was puzzled, because it also didn’t look like the movie Swing Kids, either. Though I didn’t know it at the time, I had stepped into the world of Single Step East Coast Pretzel Swing.

I might have never stepped onto that dance floor, but I had my friends with me. I asked them to dance, and one-by-one, danced with them until I felt confident enough to ask a stranger to dance–confidence I built at first by making sure she was a whole lot worse than me. This is how the next few months at the Masquerade went.

The best times were when they stopped playing Brian Setzer and Big Bad Voodoo Daddy long enough to play a song from the Swing Kids soundtrack. I would go out there, and just move my body to the music, with my five moves, my friends, and my furious, galloping triple steps.

At this time in my life, I was 6 foot tall, skinny and awkward, with terrible posture. My dancing those first few months must have looked like a broken umbrella caught in a hurricane. But can you imagine a more exhilarating feeling for a broken umbrella?

I’d like to give a shout-out to my Druid Hills Drama friends who invited me to those first lessons and months of dancing, especially Rachael Lambert, Jenny Pittam, and Rachel Mewbron. It was a great idea.